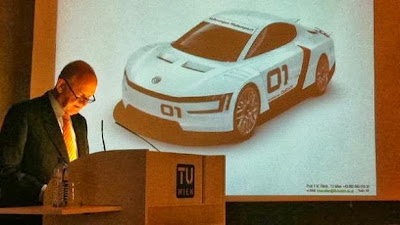 Volkswagen really don't seem to 'get it'! The chairman of the supervisory board at Volkswagen Group, Ferdinand Piëch, revealed during a lecture at the Vienna University of Technology that VW are working on a racing version of the XL1 to be powered by a 1.2 Liter two cylinder Ducati 1199 Panigale R superbike engine.

Instead of ditching the XL1's 47 hp two-cylinder diesel engine and showcasing their recently launched EV strategy by installing a high performance 200 kw electric motor into the low drag carbon fiber XL1 chassis, something that might give a Tesla Roadster a runs for it's money, VW decide to stay old school and take a huge step backwards by off-loading the XL1's entire hybrid system to bring the XL Sport's down to 795 kg.

Not only does the 190 hp / 123 Nm Ducati motorcycle engine has less power and torque than a standard Tesla Roaster, and significantly less than a Roadster Sport (300 hp / 400 Nm) but the V-Twin's peak torque is at 9,000 rpm instead of from 0 rpm like the Tesla. While the XL Sport may have a weight advantage over a Roadster (1,235 kg), it'll still be significantly slower 0-100 km/h and will be about as technically advanced as a motorcycle engine powered Locost Britsh kit car, or even the Piontek Sportech kit car chassis the Tesla powertrain was originally developed in. 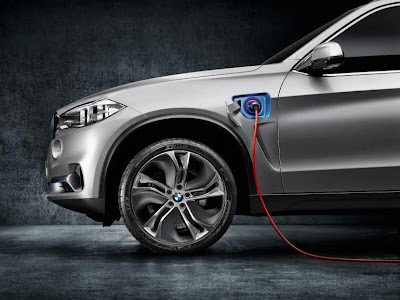 Not only have BMW invested a total of €600 million ($811 million) in it's i3 and i8 electric vehicle production network, a spokesman this week spelled out BMW’s commitment to electrification in no uncertain terms.

“We are planning to have a plug-in hybrid in each and every model series,” BMW’s head of production for large vehicles, Peter Wolf, told motoring.com.au this week. “So far we have the 3, 5 and 7 Series as full hybrids, and at the other end of the bookshelf the i3 and the i8. We are planning to work on that with the X5 eDrive, but at this stage, the plug-in is a completely new concept, and the battery is very specific [to the X5].”

BMW showed off the X5 eDrive concept at the recent Frankfurt motor show, and officially launched it this week. The large SAV (not an SUV, mind you) has an intelligent all-wheel-drive system, a four-cylinder gas engine, a 70 kW electric motor and a 19-mile electric range.

Wolf said that the X5 eDrive is close to production-ready, but wouldn’t give an actual date: “We can’t tell [you] anything about what is the start of production, but we are working on such a concept [and] we are very far [along]. But it’s not a part of next year.” 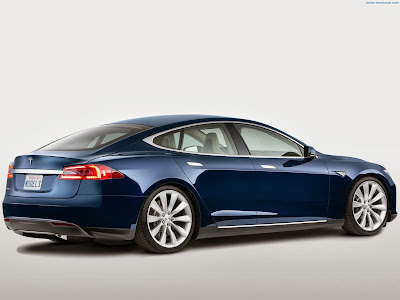 Sumitomo Metal Mining will invest ¥4.8 billion (US$48 million) to boost its production capacity of lithium nickel oxide (LiNiO2) from the current 300 tons per month to 850 tons to meet anticipated increased Li-ion cell production by Panasonic to meet the growing demand for Tesla Model S EVs.

Sumitomo successfully developed its high-performance lithium nickel oxide for cathode materials in collaboration with Panasonic Corporation and is now supplying this material to that company, which uses it to make the cylindrical lithium-ion batteries which are adopted in the electric powertrains used by Tesla.

Tesla commenced deliveries of its award-winning Model S sedan in the US in June 2012. With Model S deliveries now underway in Europe and slated to begin in Asia, including Japan and Australia, in the spring of 2014, Panasonic is planning to increase production of its lithium-ion batteries.

To respond to this expansion of the market for automotive rechargeable batteries, Sumitomo will expand its production facilities for lithium nickel oxide at its Isoura Plant in Niihama City, Ehime Prefecture. Expansion work is to get under way in October, with completion scheduled for June 2014. 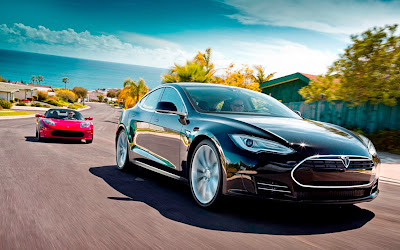 A handful of Tesla Motors Inc. electric cars are now available for rental at two California airports by Hertz Global Holdings Inc., which is adding more upscale autos to its fleet.

Hertz said it is introducing Tesla Model S and Roadster rechargeable cars at Los Angeles and San Francisco airports. Hertz has five Teslas combined at the two airports, with rental prices starting at about $500 a day, Paula Rivera, a Hertz spokeswoman, said in an e-mail.

The Tesla models expand on a lineup of higher-priced vehicles that Hertz has added to its fleet under its Dream Cars program, which includes Ferrari and Lamborghini models.

Enterprise has carried three Tesla Model S cars in its Exotic Car Collection fleet since June and plans to add two more by the end of the year, spokesman Greg Phillips said in an e-mail. The cars rent for about $300 to $500 per day, he said. 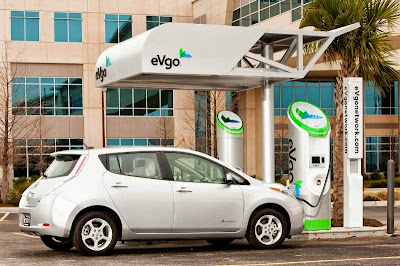 Driving the all-electric Nissan LEAF means never having to buy gas. Now, thanks to the new "No Charge to Charge" program, offered by Nissan and NRG eVgo, new buyers and lessees of the all-electric Nissan LEAF in the Dallas-Fort Worth and greater Houston areas will have unlimited access to the eVgo network for public charging stations for their first year of ownership at no cost.

Beginning in October, customers who lease or purchase a new Nissan LEAF in the Dallas-Fort Worth and Houston markets will receive one year of complimentary access to eVgo's comprehensive Freedom Station (R) charging network, including 23 locations in the Dallas-Fort Worth metroplex and 17 in the greater Houston area. Also, included as part of the eVgo network, is charging at Park N' Fly locations at DFW and IAH airports.

"Nissan LEAF owners who already subscribe to NRG eVgo's Freedom Station network rave about the convenience and increased range confidence it provides," said Erik Gottfried, Nissan's director of EV Sales and Marketing. "Adding one of the country's most innovative charging plans to the world's best-selling electric car is a clear win for Nissan LEAF buyers."

Dallas-Fort Worth is one of the fastest growing markets in the country for Nissan LEAF sales, with deliveries up 500 percent so far in 2013 as compared to 2012. The presence of strong public infrastructure with eVgo, as well as major technology companies and strong word-of-mouth referrals from existing owners has fuelled the rapid rise in LEAF sales.

"NRG eVgo has created a comprehensive suite of electric vehicle charging products to support the growing number of EVs and to address EV drivers' need to charge both at home as well as on the road," said Jack Cannata, director of marketing for NRG eVgo. "With access to our well-placed charging stations across the Dallas-Fort Worth and Houston metro areas, Nissan LEAF drivers can really maximize their use of the vehicle."

eVgo Freedom Station sites, conveniently located along major roadways, offer electric car drivers DC fast charging and Level 2 charging. DC fast chargers can deliver up to an 80% charge in less than 30 minutes. Level 2 chargers deliver range at a rate of 12 -- 25 miles per hour. Most sites are available 24/7 and are positioned near retail stores as well as restaurants to provide the option to shop or eat while charging.

Nissan will offer "No Charge to Charge" with acquisitions of the Nissan LEAF made between October 1, 2013 and March 31, 2014 at all certified Nissan LEAF dealers in the Dallas-Fort Worth and greater Houston area markets. 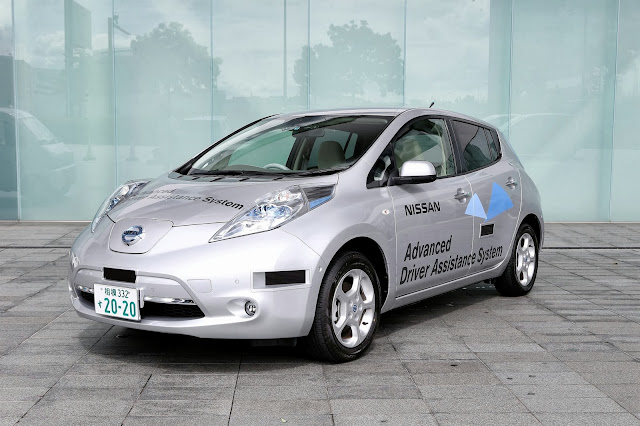 Nissan President and CEO Carlos Ghosn today took delivery of Japan's first license plate for a car equipped with highly advanced driver assist systems. It clears the way for a Nissan LEAF equipped with the technology to be tested on the public roads in Japan for the first time. The research program will accelerate the development of technologies fundamental to Autonomous Drive. The systems are designed to allow the driver to manually take over control at any time.

The license plate includes the number 2020, which reflects Nissan's goal to be ready with multiple, commercially-viable Autonomous Drive vehicles by the year 2020.

"This is an ordinary license plate for an extraordinary vehicle," said Nissan president and CEO Carlos Ghosn. "A month ago we revealed to the world our 2020 Autonomous Drive target. Road testing of the underlying technologies is critical to maintaining our leadership position and we are grateful to the Government of Japan for its support."

The Nissan LEAF to be tested is capable of a number of functions, including:

At the recent launch of the BMW i3 lithium-ion battery-electric car, BMW board member Ian Robertson said that in the next three to four years there will be more progress in battery development than in the previous 100 years. He said electric cars will have batteries with twice the current power within four to five years, which will double the range.

Lithium metal-air batteries can store more than 5,000 watt-hours per kilogram. (A123 M1 cells are around 120 wh/kg) That's more than forty-times as much as today's high-performance lithium-ion batteries, and more than another class of energy-storage devices: fuel cells.

The reduction in battery mass is achieved by eliminating the need for a second reactant inside the cell. Lithium metal batteries react with oxygen in the air that is pulled in through a 'breathing' casing, making them lightweight and compact.

The technology is being studied by researchers including IBM , which is working to develop a lithium-air battery that will let electric vehicles run 500 miles on one charge.

Given the recent new that General Motors is working on an EV that can go 200 miles (320 km) per charge at a cost of about $30,000 to compete with Tesla's as yet un-named 200 mile $30,000 EV due in approx three to four years, the 2016/17 model year promises to be a very exciting year for affordable, long range electric vehicles.

TOYOTA Racing fought a race-long battle for victory in the Six Hours of the Circuit of the Americas before taking second place in the fifth round of the FIA World Endurance Championship.

After six hours of intense racing in hot temperatures, the #8 crossed the finishing line just 23.617 seconds behind the race winner.

The TS030 HYBRID was able to get strong performance from the same set of tyres over two stints. This, combined with quick pit stops, reduced the amount of time the #8 needed to spend in the pits.

The next round is TOYOTA Racing's home race, the Six Hours of Fuji on 20 October where the team will have two cars competing as the #7 of Alex Wurz, Nicolas Lapierre and Kazuki Nakajima returns to action. 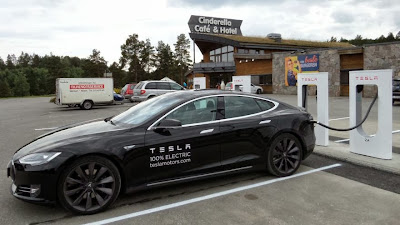 The newly landed Tesla Model S, after a market presence of less than two months, has already topped Norway’s best-sellers' list during the opening two week’s of this month, comfortably outselling all other cars, regardless of fuel type, accounting for 6.2 per cent of all the new cars sold in Norway.

Hot on the heels of recording 184 registrations in its debut month in Norway, registrations of the Model S in Norway hit a chart-topping 322 units to bulldoze Volkswagen’s conventionally powered Golf (256 units) out of first place by a substantial sales margin, according to AID compiled data.

The number eight slot went to Nissan’s LEAF, Norway’s most popular electric car so far this year. Both fully-fledged electric cars have captured a combined market share of 9.1 per cent.