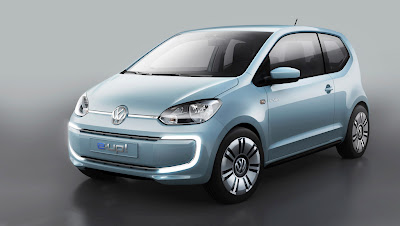 Volkswagen has confirmed that it will lift the veil off of an all-electric version of the pint-sized up! at the Frankfurt Motor Show next month.

Likely dubbed e-up!, the small EV will be offered as both a three-door and a five-door hatchback. Apart from discreet badges on the front fenders and on the trunk lid, it will look exactly the same as its gasoline-powered counterpart, enabling it to appeal to buyers that want a low-key EV.

Tipping the scale at almost 400 pounds, the up!'s electric drivetrain will consist of an electric motor mounted in the engine bay and a lithium-ion battery pack stored under the rear bench seat. The motor will send the equivalent of 82 horsepower to the front wheels, propelling the e-up! from zero to 62 mph in a little under 13 second and on to a top speed of 80 mph.

The lithium-ion battery pack will be rechargeable in about six hours when plugged in to a regular household outlet, or in 40 minutes when using a quick charger. It will give the city a car a maximum driving range of 80 miles.

After greeting the show-going public in Frankfurt, the e-up! will hit showrooms across Europe before the end of the year.

MotorWeek take VW's futurecar for a spin around Wolfsburg, Germany and the Autobahn. They managed 147 miles per gallon on their trip (not 261 mpg as VX claim)

Volkswagen made big claims about the efficiency of their purpose-built XL1 diesel-hybrid. They claimed the car was good for 314 mpg, which equates to 0.9 l/100km in the Metric system. However, at a recent test drive event organized by VW, a handful of journalists were given the chance to drive the mid-engined XL1.

The Automobile Magazine representative at the event averaged "only" around 160 mpg or 1.47 l/100km, which is still a hugely impressive figure but not the EU-certified314 mpg originally promised.

It's not all bad news. Autocar were also at the event and report that on an early test drive, which including crossing a mountain range, the most economical drivers achieved a real 188 mpg and conclude there’s surely potential for 200 mpg on a long motorway run.

The upshot is that the plug-in hybrid XL1 is probably still the most economical and most aerodynamically efficient production car of all time. 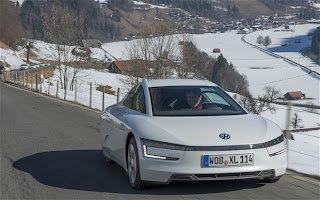 Volkswagen will be lining up at the start of this year’s Silvretta E-Car Rally with two innovative vehicles: one is the XL1, the most efficient production car in the world, which is equipped with a plug-in diesel hybrid engine. The other is the e-up!, the first electric vehicle from Volkswagen to be produced in high volume. Volkswagen is showing in this way that these alternative drive systems are capable of excellent performance on Alpine roads as well.

The new e-up! is taking part in the Silvretta E-Car Rally in the Austrian Montafon region for the first time. With its Alpine route profile, the rally is both a test of reliability and highly demanding, as the challenge is to recover large amounts of the power used on the long uphill climbs through battery regeneration on the subsequent downhill sections.

With a totally electric drive system the e-up! provides an entry point to a new pioneering Volkswagen vehicle concept and with four seats guarantees scope for full utilisation. It is a car for everyday use, with impressively high torque of 210 Nm. Practically silent and with no loss of traction during gearshifts, the e-up! is powered by an electric motor that delivers a maximum output of 60 kW / 82 PS. It thus accelerates from 0 to 100 km/h in 12.4 seconds and achieves a top speed of 130 km/h. With its 18.7 kWh lithium-ion battery it has a reach according to NEDC of up to 160 kilometres. This means impressively low energy costs of less than €3 per 100 kilometres.

The e-up! can be charged with 2.3 kW plugged into any standard 230V socket, with 3.6 kW via a home-installed wall box or with up to 40 kW plugged into a DC fast-charging station via the optional CSS (combined charging system). In the latter case, the battery is 80 per cent charged in under 30 minutes. The power connection point for charging the battery is concealed as usual under the fuel cap. In the ideal scenario the e-up! will be charged using electricity from regenerative sources and will then be running 100% CO2 neutral.

The e-up! differentiates itself from the basic up! model through a high-quality, aerodynamically optimised design. One striking identifying feature externally is the curved arrangement of the LED daytime running lights in the bumper. The front section, sills and underbody have also been aerodynamically enhanced. Burnished 15-inch alloy wheels with low rolling resistance tyres, Volkswagen emblems on a blue background and e-up! lettering on the hatch and the front doors make the fully electric four-seater instantly unmistakable.

Only a premium level of trim is being offered for the e-up! In addition to the high up! specification it includes ‘maps+more’ navigation, Climatronic climate control and multi-function display, heated windscreen, heated seats and tinted rear windows. The mobile online ‘Car Net’ services, which can be controlled via smartphone, appear in the e-up! for the first time in the New Small Family and also form part of the car’s standard specification.

The interior is characterised by light grey seat covers with blue fell seams, a design specific to the e-up! The purposeful use of leather and chrome trim conveys a purist overall impression – in keeping with a fully-fledged, urbane electric car’s vehicle concept.

The entry-level price of the e-up! in Germany as an already well-equipped base model inclusive of battery is €26,900. This autumn at the IAA (International Motor Show) in Frankfurt, Volkswagen will announce further details on how the vehicle is to be marketed, including, for example, leasing and flexible car hire packages. 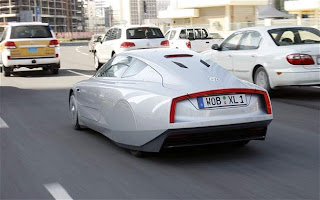 Volkswagen's E-Up! electric hatch back was recently spotted testing near Gotenberg in Sweden. The Swedish blog reporter who stumbled across the E-Up! unattended at a local charging station noted...

Volkswagen is writing a new chapter in mobility in presenting its first fully electric production vehicle: the new e-up!. The four-seat car – which operates with nearly zero noise – is being shown at...

At next week's Geneva International Motor Show, Volkswagen Commercial Vehicles will be showing a transporter concept vehicle: the e-Co-Motion. Despite its large cargo capacity it is compact and...

Preliminary details and first photos with the Volkswagen e-Golf are now available, ahead of the EV's debut in Geneva next month. The front-wheel drive electric Golf VII will feature an electric...