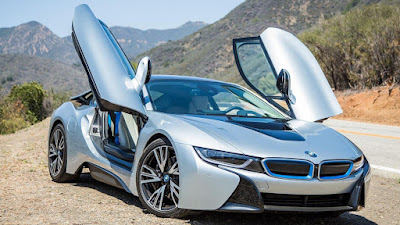 As the EV technology arms race gathers pace, the second generation BMW i8 is rumored to boost power output from it's current 350 hp to a more Tesla like 750 hp.

Automobile reports that the next-generation i8 will ditch the current i8’s three-cylinder, range-extending internal combustion engine in favor of going all-electric with three high-revving (25,000rpm) electric motors producing a total of 750 hp and more potent batteries capable of delivering a 500 kilometre range. Also part of the package are four-wheel drive, four-wheel steering, torque vectoring, and an active suspension system that scans the road ahead.

While the front axle mounted electric motor in the current i8 revs to 11,400 rpm and is mated to a 2 speed GKN transmission, using high revving electric motors could potentially allow a single speed reduction gearbox yet still achieve terminal velocity on Autobahnen.

Back in 2012 Mercedes demonstrated the full potential of all-wheel-drive torque vectoring with their Mercedes SLS E-Cell. By the time the next gen i8 launches around 2022-2023, a full decade after the SLS E-Cell, we can only hope BMW's next generation EV sports car at least meets if not exceeds that benchmark.